This one doesn't really need an intro. There has been some really weird stuff that has happened to me over the last ~15 years. Such as...

I still don't get how that caught on. Sarah is a wizard and Morgen & Taylor are miracle workers to get that thing not only off the ground but keeping it going for more than three days. The fact that (despite being a shell of itself) that it's still a thing at all and I'm referred to as that as much as anything else is bizarre, but I'll take it.

XBL message - Randomly signing in to my Xbox account and having a message from Muff mocking my gamerscore was something else. I'm blaming either Zac for giving him my gamertag, or myself for putting my gamertag in one of those old Q&A videos I did. In fairness I think it was a pretty meager score at the time.

I got recognized on a dating site - A friend (...at the time...) wanted to put her profile up on a dating site but was hesitant to do so. I kept trying to encourage her to just do it and ignore anything that looked suspicious or creepy. Eventually she agreed to...but only if I would put up a profile as well. I agreed and put together a pretty bare-bones listing with next to no info and a single photo. Within 48 hours I received a message - "AREN'T YOU CAPTAIN AMERICA FROM HANSON.NET???"

Deleted my profile immediately and never went back to the site again. Sat in facepalm position for probably 5 minutes afterword.

Underneath Acoustic Live: The Aftermath - Unexpectedly winding up in the front row for the Underneath Acoustic Live show was one thing, but the follow-up, where segments of it were broadcast on both premium cable channels and VH1 led to some incredibly awkward IMs and calls from a few people I hadn't heard from since high school half a decade prior; Keep in mind the last time most of these people saw me I was probably either throwing some guy around on a wrestling mat or furiously singing onstage with green and black facepaint. "Hey! I saw some Hanson thing on VH1 and there was a guy who looked EXACTLY like you in the front row." Ummm...

Halloween costume - Early era TBG fan Ginger Dzerk won the Hanson Halloween Costume Contest (despite whoever was "officially" announced as the winner) with her fan-stuck-behind-TBG costume. I wasn't in attendance for the Halloween show itself, but during the event my phone and Twitter started blowing up with people either saying something like "it was good to see you there," or "I HOPE YOU SAW THAT ON THE LIVESTREAM." Of all the things that have happened as a result of the Tall Bald Guy incident, this may actually be my favorite moment, strange or otherwise. 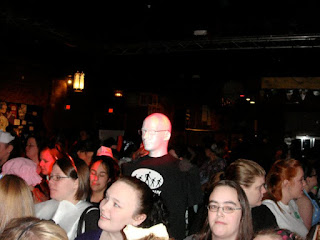 Blog is taking a bit of a backseat right now as I'm trying to prepare something pretty cool for launch around H-Day this year (so sometime after May 22nd). I don't want to say anything else about it now in fear of jinxing it / something coming up that causes it not to happen, but once I feel like it's locked in I'll put more info up.