A contact of mine works at a practice space the band was in sometime in the last few weeks. He forwarded me a picture of what looks like a rehersal setlist. It's gonna be a good tour, people.

You heard it here first. 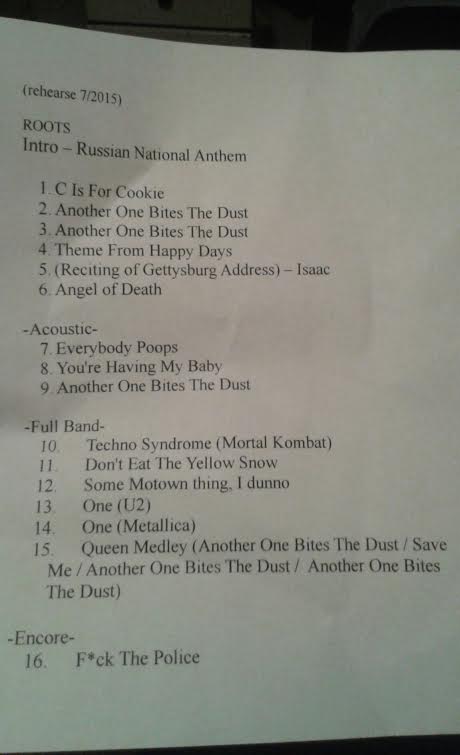 "The Power to Survive" - Pulling It Together

I had to scrap my original topic for this blog about two weeks ago when something happened in the fan community that would have made it seem like incredibly poor timing for such a topic. I'm still going to run it at some point but I thought it was best to hold off for now.

So, with not much time to come up with something that isn't a top 5 list (those are mid-month only!), I'll just say this: as much as everyone in the community can tear into each other at times, it's good to see everyone pull it together when it matters. More directly, a fanbase that admittedly isn't what it used to be pulling together almost 6k in ~2 weeks is pretty awesome.

Full disclosure, I don't even know this girl that well. I'm pretty close with a lot of her friends though, so this has absolutely grabbed my attention. What's really incredible, though, is that I've seen people that I am friends with who literally don't know her at all throw in hundreds of dollars.

So, sorry for the short entry this time. I'll just leave you with this - please try to throw in a few bucks if you haven't. As always with these kind of things, there's a huge burst at the start but then things start to slow down after it's no longer top of mind. A donation a week from now is just as important as one made 5 minutes after the fund page went up.

Headed outta town for non-Hanson related music this week. You'd better believe it's weird as hell to drive by a familiar venue and there being no Hanson show going on.

I'm not thrilled about the tour dates just released. We'll see what plans are, if any.


Blog title taken from Ramones - I Believe In Miracles
I used to be on an endless run
Believed in miracles 'cause I'm one.
I've been blessed with the power to survive
After all these years I'm still alive.
Posted by TBG at 6:26 AM No comments: